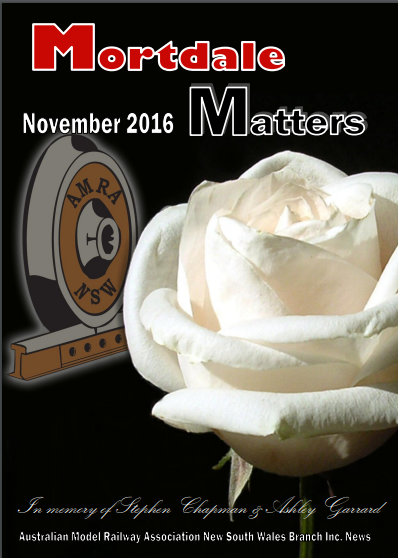 Wow, what a roller-coaster of emotions we have experienced in the Branch since the last issue. We have had the high of our annual exhibition being held, with the sad news received on the Monday of the sudden passing of Stephen Chapman. Just as we were getting over that shock and preparing for the open day we then received the news of the passing of another of our members, Ash Garrard. Although these passings are very sad and did weigh heavy on our hearts, the 2 events held at the time continued on as I’m sure both gentlemen would have wanted, and we certainly provided the entertainment and enjoyment the crowds of people came to experience.

As has been the norm for the past several years, the Branch had an open day on Saturday 15th October. There was a reasonable number of visitors on this day, with several comments being made on the level of detail and operational ability of the HO layout control centre.

If October wasn’t already busy enough, on Friday 28th October the Branch celebrated its 60th Anniversary. This is a huge achievement for any club, and all the members both past & present should be very proud that the Branch reached this milestone. The branch held several events over a long weekend to commemorate the diamond jubilee. There was a gathering at the clubrooms on the Friday evening. On Saturday & Sunday there was 2 different tours in The Rail Motor Society’s CPH1&7. Saturday saw a tour to most ends of the suburban network. After leaving Sydney, we travelled to Carlingford, Richmond, Macarthur and Waterfall before returning to Sydney.

Sunday saw the railmotors head to Moss Vale via Southern Sydney Freight Line, returning to Sydney via the Illawarra escarpment. A more detailed report of the weekend’s railmotor activities will appear in the next issue.

The last thing I would like to do, is offer my appreciation to both Barry & Marilyn Wilcockson. At this year’s AGM they both decided to step down after a combined 35 years on the committee. Barry has held the positions of President, Vice-President, Secretary & Exhibition Manger, while Marilyn has been the treasurer for the past 17 years. I would like you all to join me in thanking them for their tireless efforts over the years.

Hope you enjoy the read!

Until next issue,
Damien George
Editor